Donny Shahar presents on climate change to a packed house on 11/18/19, sponsored by the Jean Beer Blumenfeld Center for Ethics and the Philosophy, Politics, and Economics program at GSU. 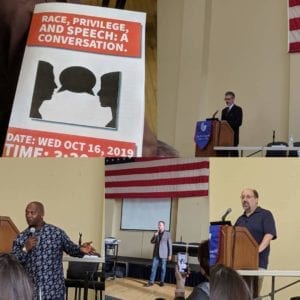 “Debt in College and Beyond: A Road-Map for Student Financial Literacy.” Cosponsored with the Financial Management Center

Presentation:
April 19, 2019
Sarah Burgess, University of San Francisco: “The Scandal of Identity, or How to Make a Scene”

April 15, 2015
Jessica Stern, “Politics and Immigration: A tug of war with millions of lives”

Panel Discussion: May the state force you to be free? On the role of regulation
April 8, 2014
Discussants: Alex Gourevitch (Political Theory, Brown University) and James Otteson (BB&T Center for the Study of Capitalism, Wake Forest University)