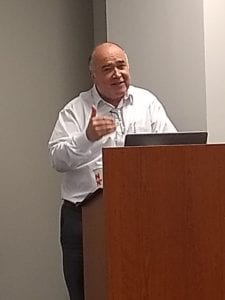 Colloquium: Predrag Cicovacki (the College of the Holy Cross): “The Meaning of Life”. Mar. 30, 2021. Event flyer and recording.

Colloquium: Jose Mendoza (University of Washington): “‘Go Back to Where you Came From!’ Racism, White Nationalism and Xenophobia”. Mar. 26, 2021. Event flyer and recording.

Colloquium: Joel Reynolds (Georgetown University): “We Are All Somebody’s Child: Disability, Speciesism, and the Problem of Dehumanization”. Mar. 5, 2021. Event flyer and recording.

Colloquium, Jacob Levy, Political Science, McGill University, February 15, 2016, “There is no such thing as ideal theory.”

Colloquium: James Stacey Taylor, Associate Professor of Philosophy, College of New Jersey, March 29, 2013, “Why we cannot wrong the dead: The case of promising.”

Fall 2012 speaker series: “Values and Social Choice” (cosponsored with the Department of Economics of the Andrew Young School of Policy Studies).
Four distinguished guests visited Georgia State as part of a speaker series. Each delivered a colloquium to the Departments of Economics and Philosophy. Each also sopke at the seminar on “Values and Preferences in Social Choice”, which was team taught by Profs. Yongsheng Xu (Economics) and Andrew I. Cohen (Philosophy). The course and speaker series were inspired by C. Richard Long, Georgia State economics (emeritus). He generously helped to fund the Fall speaker series:
Prasanta Pattanaik (Economics, University of California – Riverside) 10/10-11, with a presentation, “On the Notion of Capability,” Th 10/11, 3 PM, room 749, AYSPS.

“To be or Not to be (a Parent): How interdisciplinary research on well-being can help us with the big questions” March 17, 2012
Valerie Tiberius (University of Minnesota – Twin Cities).
Cosponsored with the Center for Ethics Student Forum and Phi Sigma Tau.

The Jean Beer Blumenfeld Center for Ethics and the Department of Philosophy cosponsored a series of talks on diversity in academia in the Spring of 2012. Among the speakers were Bernie Boxill (UNC-Chapel Hill, philosophy), Valerie Tiberius (University of Minnesota – Twin Cities, philosophy), Dabney Dixon (Georgia State, Chemistry), and Louise Antony (U-Mass, Amherst, Philosophy).

“Reflections on the Standard of the Reasonable Person in Criminal Law”
March 19, 2011. Marcia Baron (Indiana University, Philosophy).
Cosponsored with the Center for Ethics Student Forum and Phi Sigma Tau.

Annual Phi Sigma Tau Philosophy Colloquium
March 14, 2009
Featuring five student essays and a keynote address by Prof. Mark Murphy (Philosophy, Georgetown): “A Neglected Solution to the Problem of Political Authority?” The symposium was an undergraduate and graduate conference of philosophy papers on any topic of philosophical interest, open to all undergraduates and graduate students from any university.

Colloquium: Why Your Life Is So Much Worse Than You Think
October 15, 2005
David Benatar, University of Cape Town